Join America’s most attractive audio engineer as she makes waves, with waves from afar as her host describes waves of fear and lies over-topping the amber waves of grain.

As the world is being conditioned by the Ruling Left to accept less and less as the new normal, the marriage rates in the formerly great Britain are at at their lowest levels in recorded history.

However Leftists across the nation took time out from stoking the Coronavirus panic to celebrate Land O’ Lakes ascent from their obvious and virulent racism and cultural appropriation: the removal of the pretty Indian maiden from their logo.

Explore with us the possibility that one of the main drivers of the panic and lock down may one day be revealed as former CIA director John Brennan’s criminal behavior, and it’s embarrassing, (perhaps even actionable) nature.

Get a fat dose of hypocrisy from Ted Cruz, an actual murder, (as opposed to leaving your house during “quarantine”) at the hands of the State of Florida, and more and more murder at the hands of Governor Gretchen Whitmer.

Join Alex Berenson and us as we examine together the possibility that those who drove the Coronavirus panic can’t afford to let the lock down end, because then all eyes will be on them…

We’ll tell you about more Coronavirus hysteria from Obama’s Labor Secretary Seth Harris, the breadth of the stench of fear revealed in new Pew Research & Gallup polls, and the inflated body counts in New York and elsewhere keeping that stink fresh in our noses.

Discover why the tyrannical leftists who hijacked the education of our children are terrified, (and slanderous) over what free citizens and their children might think & do while home-schooling!

This week you get all that, plus James Carville’s presumptive positive test, shopping with ANTIFA, the end of the Drudge Report, those filthy canvas shopping bags, how the economic collapse we all volunteered to execute upon ourselves might at least threaten the Chinese Communist Party with collapse, and how a preacher ridiculed by the New York Post and FoxNews for saying God is bigger than the virus is getting the last laugh.

Join America’s most attractive audio engineer and her host as the masks go onto the scared and come off of the tyrannical. 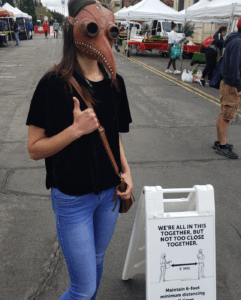 And even in the midst of the greatest threat to our way of life since the last time the socialists and fascists tried to take over the world, the sick impact of pornography is to drive us all ever lower and lower.

The aforementioned fascists and socialist have admitted to running up the Coronavirus body count, “doctor” Bill Gates is schilling for China and positively giddy with a sense of self importance perhaps unequaled in our lifetime, and farmers have begun plowing under the crops we would have eaten if we hadn’t freaked-out and closed the hospitality industry.

And while private industry tries to step in where the government failed miserably, please refrain from thinking that making ventilators or laying around watching TV to equates to storming the beaches at Iwo Jima. This type of “patriotism” not only pales in comparison. But the WWII generation would be embarrassed for us.

The malevolent Russians and the tyrannical Saudis have agreed “in principal” to end their oil price war, (but keep in mind they’re both a little short on principals). And gas dropped below one dollar a gallon! The only problem is you have to go to Minnesota to get it!

The government schools have managed to fail at education even further, (and it’s not because they are closed). And the generation mis-educated by them continues the futile search for ALIENS!!

Victor Davis Hansen asks if we’ll ever just stop crying, Zoom turns out to be Chinese/Facebook malware, and the founder of the anti-Israel BDS movement will shelve his bias if and when a Jew figures out the vaccine or the treatment for COVID-19.

Churchgoers in Mississippi were fined $500 each for attending church, Ezekiel Emmanuel wants to die, (and we are with him on that), but before he does he wants to lord it over the rest of us for as long as he can.Hear from a real epidemiologist on just how this epidemic should have been handled, (spoiler alert; perhaps in similar fashion as we handled  previous epidemics)?

The communist Pope is also an environmentalist nut job.

California may have some “herd immunity” to the novel Coronavirus already, and Italy appears to have turned the corner, but that doesn’t seem to be helping ameliorate the the irrational fear gripping about 2/3 of the American population.

All that on Resurrection Sunday, along with terror at the fish market the bird whisperer’s take on face coverings, and negotiating with children & bunnies.

Join America’s most attractive audio engineer and her host as they offer help for navigating between the wolves and the sharks and the panic and the real threat.

You’ll hear and see undeniable evidence that every unborn baby is a person, (who needs other people). 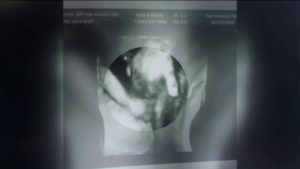 You’ll also hear about a rain forest discovered deep under the ice of Antarctica, and who we think best explains it, (Walt Brown in Part II of his textbook explaining why the geological features of the earth appear as they do, “In the Beginning“).

We had a story on Joe Biden, but realized it didn’t matter enough to talk about on the show…

Los Angeles Mayor Eric Garcetti practically wet his pants when Arnold Schwarzenegger’s vacuous daughter tweeted about her “huge issue”, in light of the pandemic with the surfs and their Famer’s Markets, (Garcetti shut them down).

Gavin Newsom,  continues freeing killers, in hopes of “re-imagining” theft on an even grander scale, the UN is angling for a 10% skim off the Corona Virus, and amidst the fear and hysteria, John Ramsey, (father of JonBenét and one of her killers) is on cable TV looking for the “real” killer!

Who has blood on their hands? Everyone who allowed Travis Lewis to live after he murdered Sally McKay and Lee Baker, so that he could murder Sally’s daughter Martha, 23 years later in the same house.

There are only nine states in America without “stay at home” orders, (we’ll see how they fare).

The pandemic might have been the result of an accidental release from a Chinese virology lab, targeted antibodies may be some of the keys to preserving life and ending the fear of COVID-19, and liberals hate that Choloroquine may be an effective treatment for it!

Harvey Weinstein doesn’t have that particular virus, (and neither does the woman in New Orleans who last week, Trump supposedly killed).

And kids are happier at home than at school!